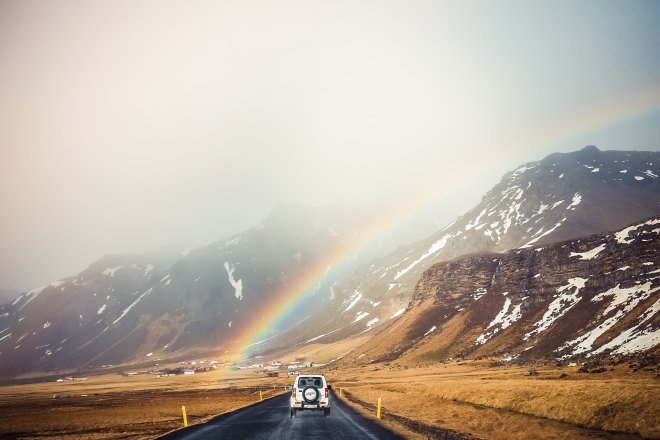 Walking past giant stone mansions covered in ivy, that looked like they came straight out of a fairy tale, I thought to myself, “If we turned around and got back in the car before getting to the bonfire, this night would still feel complete to me.” My friends and I got to a huge iron gate, and I was the first to hurl myself over, so they would stop talking like the Scooby Doo crew about how we could get through or around it. Using our flashlight apps on our phones, we made our way down a sandy path to the beach. A bonfire was made, and flamethrowers started to put on a show with the twinkling night sky and ocean waves as their backdrop.

I sat by the fire next to a guy named Darrin who seemed as straight as a rainbow, and we talked for hours about philosophy and life. Thrilled to have a new gay bff, I was excited when he started talking about hanging out in the future. He asked me if I would be going to Lucidity, a festival near Santa Barbara. When I said I wanted to, but didn’t have plans to go, he wasn’t having any of it. He insisted I go and stay with him at his campsite which took away a lot of the stress of having to get, and lug, all of that camping shit around, and put a campsite together. Though I still didn’t know if I’d pull the trigger and buy the ticket, the seed was planted.

The next day, I convinced my neighbor Marissa, who also happened to be my best friend In Santa Barbara, to come along with me. I was shocked when she enthusiastically agreed considering she probably had only a few hundred dollars more than the homeless man, or as I prefer to say, street dweller, that walks up and down State Street talking to himself. Not long after we bought the tickets, an indecent occurred which made me question how the festival experience would go.

I received a text from Darrin saying he’d like to take me to the movies or see a concert. Regina Spector, a singer whose work I admire, was performing in town that weekend and he got us tickets. The jew in me was thrilled to attend without having to pay, and excited to join. A few days later, I go outside of my little yellow cottage to meet him, where he was finishing up painting his last few fingernails hot pink. In no time, his arm was around me, and from the sounds of what he was saying to me, I could tell my gaydar had been way off.

After a great show, he walked me back home and I felt like a fortune teller because I could sense what was coming next. He put his hands on my face, leaned in, and kissed me. I gave him my best attempt in letting him know I was not interested, but he grabbed my hands and responded with “Let’s just go with the flow” as he continued to hold my hands and sway his arms back and forth. He left and I immediately called Marissa to freak out and fill her in  as I tried to get his hot pink nail polish out of my hair. Thinking that I was about to be sharing a tent with this guy that I had as much interest in dating as an old man who loves talking about politics, sports, and beer, I still decided to go with the flow in terms of going to Lucidity. Thank goodness I did because what happened next I will never forget…

Stay tuned to see what happens!